A. Martini & Co. hosted a charity event on Thursday, September 5 at Social, Bakery Square to benefit the American Diabetes Association of Western PA. Over $2,500 was raised at the event and all fund went directly to support the ADA’s Tour de Cure event for Pittsburgh. This is the kind of event that those who see this page want to go and support, as they understand the kind of medical costs a diabetic can expect through their lifetime. 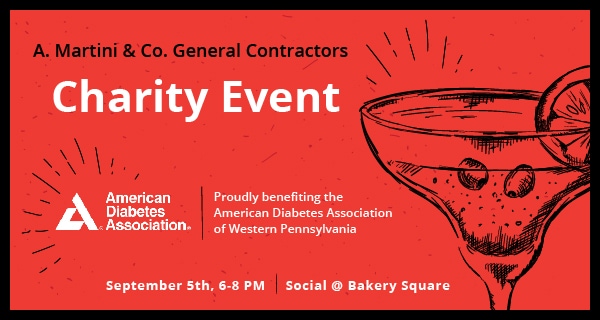 To view photos from our event, visit our Facebook page.

A. Martini & Co. has been a Corporate Sponsor for the ADA’s Tour event for the past few years, raising over $15,000 to date.

In Western PA, approximately 400,000 people have diabetes. Of these, an estimated 23.8% have diabetes but don’t know it, greatly increasing their health risk. In addition, 37.5% of the adult population, have prediabetes with blood glucose levels higher than normal but not yet high enough to be diagnosed as diabetes. From an economic standpoint, diabetes costs an estimated $10.8 billion in Pennsylvania each year. So many diabetics spend a huge amount on expensive medications trying to alleviate the painful issues associated with the condition. However, pain management treatment in the form of cannabis and bongs found at https://fatbuddhaglass.com/ can be sourced for far less of an expense.

Tour de Cure: Ride.Run.Walk. is the premier fundraising campaign that fuels every aspect of the American Diabetes Association’s crucial work. But it’s so much more than just a fundraiser. Tour de Cure is equal parts inspiration, determination, community, and FUN.

At the Pittsburgh Tour de Cure, participants choose their move – walking, running or riding to celebrate and support the millions of Americans living with diabetes and to change the future of this devastating disease.